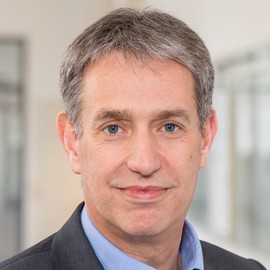 Professor of Artificial Intelligence in Healthcare and Medicine

Daniel Rückert is Alexander von Humboldt Professor for AI in Medicine and Healthcare at the Technical University of Munich where he directs the Institute for AI and Informatics in Medicine. He is also a Professor in the Department of Computing at Imperial College London. He joined Imperial College as a Lecturer in 1999, becoming Senior Lecturer in 2003 and full Professor in 2005. From 2016 to 2020 he served as Head of the Department at Imperial College. He has founded the Biomedical Image Analysis group consisting of four academics, 15 post-docs and 20 PhD students. He received a Diploma in Computer Science (equiv. to M.Sc.) from the Technical University Berlin and a Ph.D. in Computer Science from Imperial College London. Before moving to Imperial College, he was a post-doctoral research fellow at King’s College London where he has worked on the development of non-rigid registration algorithms for the compensation of tissue motion and deformation. The developed registration techniques have been successfully used for the non-rigid registration of various anatomical structures, including in the breast, liver, heart and brain and are currently commercialized by IXICO, an Imperial College spin-out company. During his doctoral and post-doctoral research he has published more than 500 journal and conference articles as well as graduated over 50 PhD students. Professor Rueckert is an associate editor of IEEE Transactions on Medical Imaging, a member of the editorial board of Medical Image Analysis, Image & Vision Computing, MICCAI/Elsevier Book Series, and a referee for a number of international medical imaging journals and conferences. He has served as a member of organising and programme committees at numerous conferences, e.g. he has been General Co-chair of MMBIA 2006 and FIMH 2013 as well as Programme Co-Chair of MICCAI 2009, ISBI 2012 and WBIR 2012. In 2014, he has been elected as a Fellow of the MICCAI society and in 2015 he was elected as a Fellow of the Royal Academy of Engineering and as fellow of the IEEE. More recently has been elected as Fellow of the Academy of Medical Sciences (2019).